Thirteen High Schools and nine Middle Schools braved the near record high temperatures and took on Social Circle High School’s redesigned 5K and 3K cross country courses.  All Walton County Middle and High Schools were in attendance and a big part of the 315 total competitors on site. 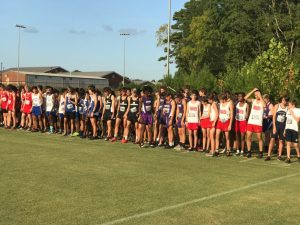 Loganville HS controlled the Girls’ race placing five runners in the top 12.  They were followed by Heritage and Walnut Grove for team honors. Mari Jablonki from Monticello recorded her 4th victory of the season with Jailin Herber (LHS) and Taylor Colver (Heritage HS) rounding out the top 3.

Social Circle HS Girls’ Team have traded finish placings with Monticello over 3 meets, coming out ahead by 5 points at home.  It appears they will both be battling for 4th place at the Region 8AA Championship in late October. The top four Region team punch their ticket for the State Championship Meet in Carrollton. 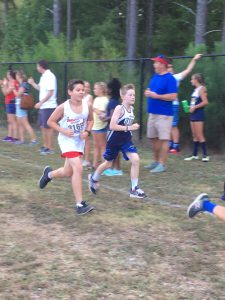 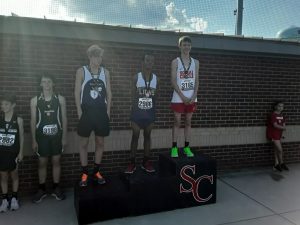 The overall atmosphere for the afternoon was as hot as the competition.  The course was a mix of grass, gravel, dirt, and concrete with a few challenging hills.  Social Circle’s JROTC marshalled turns and also added encouragement to the runners.Stadium Horns and Cow Bells could be heard from every area of the course and competed with SCHS Marching Band Practice. And as the race concluded,  both sides of the 100m finish chute were lined deep with loud cheering spectators, adding to the excitement of finish line dramas.